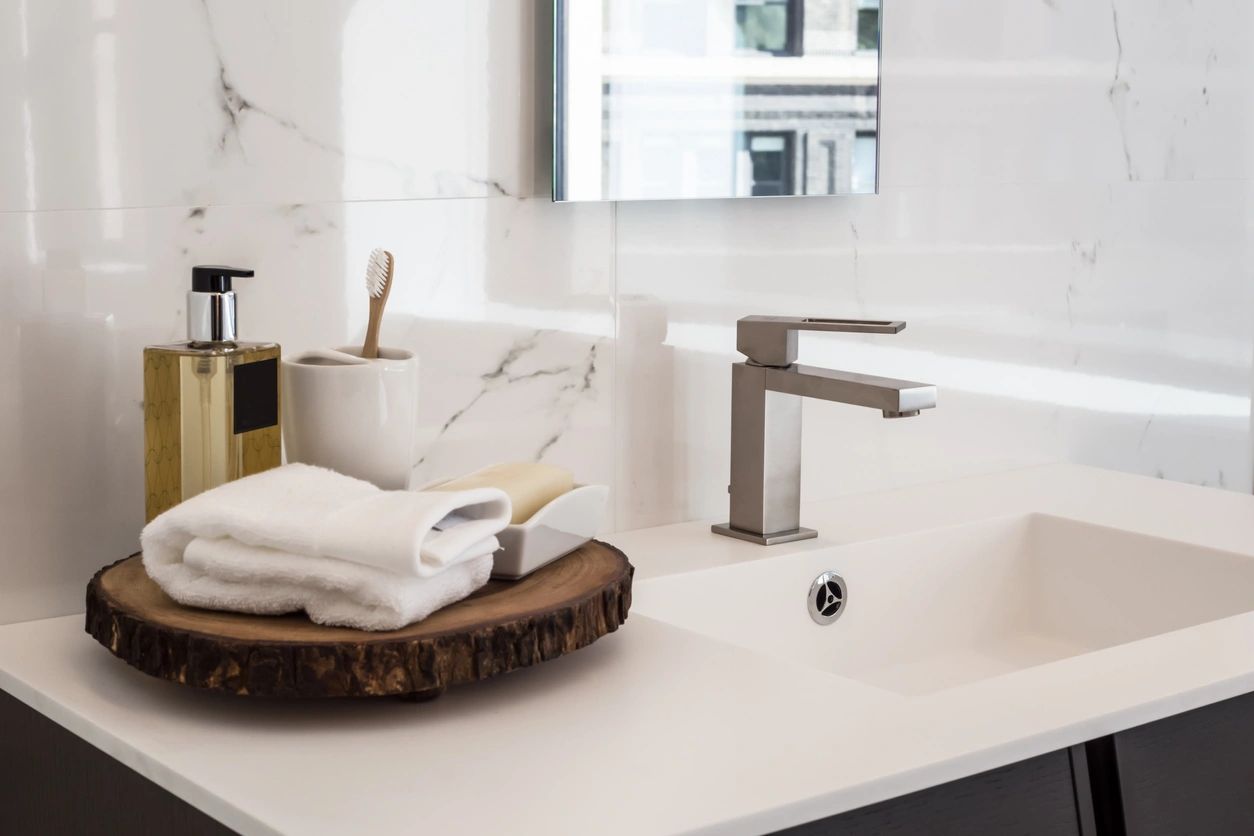 Listen To The Podcast Episode 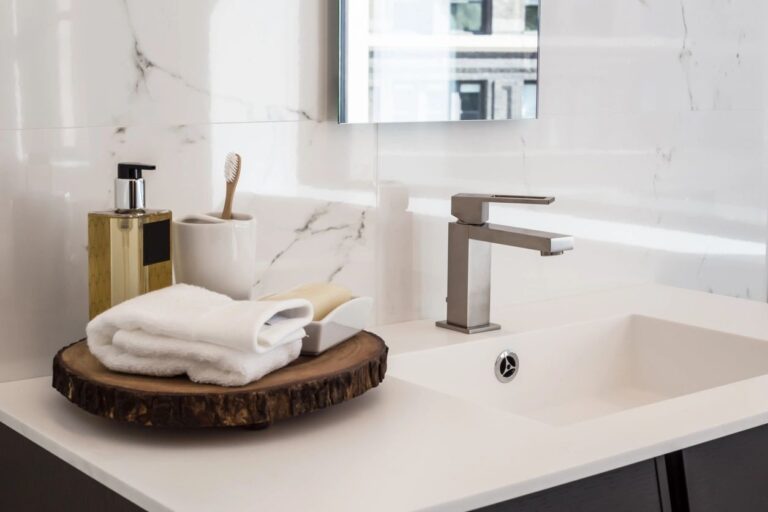 You’ve Minimized and STILL don’t have a functioning bathroom because it’s just too small.

You’ve decluttered and minimized your bathroom and you couldn’t possibly release any more stuff. And yet you still have no space. One of our community members sent me a message asking for some solutions to her small bathroom. She’s already minimized. Now, she just needs help to make it functional. Minimalism isn’t a magic wand but it does simplify life, an awful lot. It makes organizing so much easier.

First things first. I like to find out what isn’t working in the space. If you’re struggling with no space for towels, then that becomes a point that I consider when creating a plan. If you struggle with light and your makeup, I would suggest a wall-mounted lighted makeup mirror. You see where I’m going with this? Right.

You need to look for how your space isn’t functioning so you can create targeted solutions. Shayla, let me know that her lack of counter space was a major frustration and bending down to grab things from under the counter was annoying because it was dark and hard to see.

Clear Out Some More:

First of all, when you have limited space, look for ways to clear out stuff that could go elsewhere.

Basically you want to preserve the space you have for what needs to be in the bathroom.

One simple thing to move out is cleaning supplies. Instead of having cleaning supplies spread throughout your house. What I want you to do is create a bathroom cleaning pod in a bin with a handle. I actually have a canvas tote that I lug around with me to clean our bathrooms.

What I love about this system is that if you ever start running out of a cleaning supply, you know how much you have left in your entire stash, because you only have those items in one place they’re not scattered throughout your house. And then another thing I want you to think about are things like does the extra toilet paper need to be stored in the bathroom?

Some More Information About Pods:

A little deeper with the concept of pods. These are grouping items you need for activities you do. So when you do said activity, you can pull out one bin or bag and have access to all the things. Some pods I have in my bathroom, just to kind of give you an idea of what they can be: is the first aid pod, which is obviously all the first aid supplies. So if somebody has an issue, I know exactly where to get the first aid items. Whereas years ago, I might be scrambling around the house so the first aid pod is within our bathroom and it has all of our first aid supplies. I know what’s in there. I know how many of things we have because they’re not all over the house. Another thing that I have is my daily makeup pod.

And this is just in a zipped bag in my drawer. So I pull this out and put it on the counter when I’m doing my makeup and I have all the things put away, zip it back up and put it back into the drawer. I also have a hairstyling pod. This is my hairdryer, straightener, curling rod. Anything along the lines of hair products.

Then we also have a vitamin pod. These are vitamins and minerals that we take every single day. Then I have what I just call an outdoors-y pod. Because we do have a lot of space in our bathroom. I do tend to have a little bit more stuff in there, but the outdoors-y pod is our bug spray, Aloe , we also have sunscreen and things like that in there. So it’s anything to do with being outdoors.

Under Sink Storage is a Pain

Another thing that she had wrote about was under the sink. What she doesn’t like is that she has to bend down in order to get things that she needs. And that it’s dark. So I have two solutions for that.

Now we could go into a whole bunch of other solutions. We could do a pullout shelf in there that would allow you to be able to see your stuff.  And that would solve both the light issue and the bending down issue. It would just be half height shelf underneath the cabinet, wrapping around the sink, and then you’d be able to pull it out. If you’re not handy, that’s not for you. So, what I would suggest is you can get shelves that will just fit in underneath.

They’re already prebuilt. Stuff those in, and you get an extra vertical height in there. So just add extra shelves underneath the cabinet . And don’t put the stuff that you’re using every day in there, because if it’s a pain for you to get to it, Then we want to make sure that it’s stuff that you’re not using all the time.

Because of the lighting issue that you were talking about. I would put some sort of lighting down there and you can get battery powered, touch bars that can easily be installed on the inside walls of your cabinet.

And then at that point, all you need to do is just tap on it and it’ll turn on and it will instantly illuminate underneath that space. Just make sure you’re tapping them off because we had one of these in our pantry and I forgot to tap it off one time and our batteries died.

Use The Vertical Space

Another option for you is to utilize the vertical space. So the vertical space is simply your wall space. I would add shelves or cabinets above and behind the toilet. This is a great way to store extra toilet paper rolls and maybe other extra products that you don’t need all of the time. It’s also going to be your easiest place to put any of your daily use items. And just so that it looks a lot tidier and cleaner, I would put those in baskets.

Another thing you can add is wall mounted, refillable soap dispensers, so that you can clear off that counter a bit more and then put a hand towel hook beside it.

Another thing that is probably going to blow your mind is you can get wall-mounted mirrors that have shelves behind them. It’s not like a built in medicine cabinet. It is a shelf behind a mirror. Looking at it from straight on, it looks like it’s just a regular round mirror. But all of your stuff is in two shelves behind it.

There is one in particular that I’m going to suggest it’s the Umbra cubiko mirror. 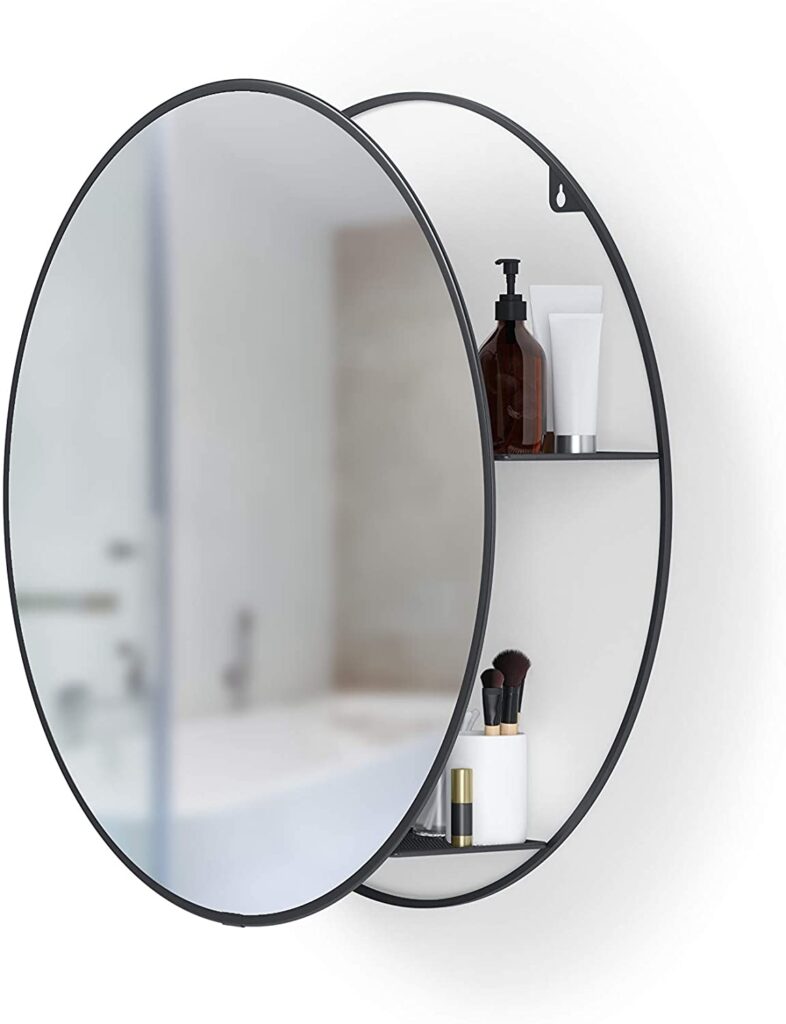 I’m not getting any kind of paid advertisement through them. This is just something that I’ve used and it’s a great item.

The other thing that you can do for using vertical space is Umbra also has these wall vessels they’re storage on the wall, but it’s also really, really cute.

So these could be your pods. You could do toothbrushes and toothpaste. You could put your makeup brushes in there.

I would add a little faux plant or an air plant in there, just so that it adds a little bit of life to your space. Because sometimes it’s nice to have a little bit of balance of some beauty in there as well.

Another suggestion would be to use wall hooks for your towels instead of rods. Towels do not stay on the rods easily. They never look like they’re, really super nice. And I found myself always having to go behind my family and tidy up the towel rods. It was just easier for them to dangle a towel back on the hook. Versus them putting it properly back on the rod. So that would be my suggestion for towels in there.

Another thing to add a little bit of storage would be to use a bath/ shower storage hanger for your shampoos and conditioners and razors and soaps and things like that within the actual shower, or bath.

A good thing about that is that it gives you a natural limit.

You just have enough space for what you will actually be using.

Make the storage containers work as the bad guys to limit you and what you have. 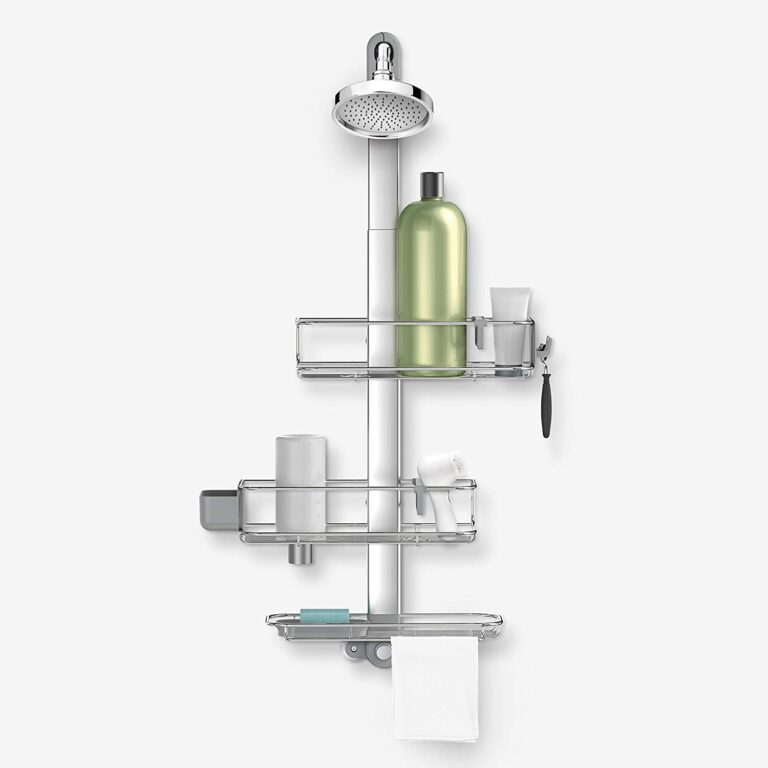 The final suggestion is for the lack of counter space. Now I did try contacting Shayla before I started doing this, and I wasn’t able to get a hold of her. I was just looking for some extra details about her space. So, I’m going to give three suggestions, not really knowing fully what will be the most helpful.

Her sink is an undermount sink. So it’s basically a flat top, and the sink is underneath. So there’s no ridges or anything on the top, which is great because you could fit a flat tray over top of it. So that you do have the counter space. You would be able to use the counter, use the tray together, and it would feel like you had more counter space. The tray would cover the sink and when you were done with it, you could put it off to the side and just out of the way. You could even put that tray underneath the sink to keep it out of the way when you’re not using it. The problem with this is that you would not be able to also use the sink and the taps during that time.

Just put a flip out and up counter space on that front area. And then you just flip it down when you’re done with it.

The other idea was doing that on the wall adjacent to it just in front. And then it would flip down when you were done with it.

My third idea for this is buying a counter height cabinet between the toilet and the sink. That would also give you some drawers.

You can find fairly narrow counter height cabinets. And that would give you two or three drawers to the right of the sink.

And that would also extend your counter space over just that little bit.

Not knowing exactly what you’re looking for with the extra counter space. These were the tips that I could come up with. I hope that gives you a few options for what to do, whether it’s a work surface or whether it’s just a place for you to have all of your makeup out while you’re doing your makeup.

That is all of the tips I have for helping you deal with a small bathroom. When coming up with organizing solutions it’s important to remember every single bathroom is different. How you function in your own bathroom is different. So organizing solutions they’re a great jumping off point but just make sure that before you come up with solutions that you fully know what the parameters are that you’re needing to organize within, and then you’re not going to waste time and money coming up with solutions that don’t actually work for you.

That’s it. I hope you have a great week friends and we will see you next week.

Join our thriving community so your home can be your haven!

CALL US TO START CREATING YOUR DREAM HOME